The 10-day Come-See-Me Festival is considered the largest, all-volunteer festival in South Carolina and attracts more than 100,000 participants and visitors each year. For more information about the Festival, or to download a brochure, visit the official website:  comeseeme.org or call the festival office at 803-329-7625 or 1-800-681-7635. 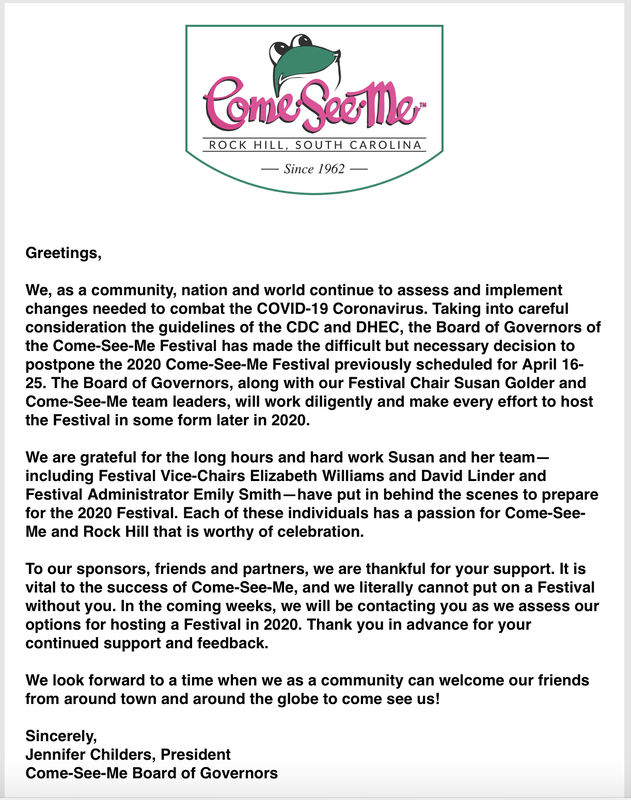 Vernon Grant’s Glen the Frog won Rock Hill’s affection when he made his debut as the mascot for the city’s annual Come-See-Me Festival in 1964.  This carefree, fun-spirited “amphibian” came from Grant’s clever imagination.   Grant once commented, “Ideas are like orphans.  They come to you with tattered clothes and runny noses.  But if you clean them up and present them to the right people, they’ll get adopted.”  When the idea of Glen the Frog was presented, it was greeted with overwhelming support and found an immediate home!

Grant stated in an interview in 1975 that his “experience in the advertising field told him that Come-See-Me needed a symbol all its own . . . Actually, what happened is that I was in the garden one morning when I heard a frog that was sitting on a lily pad singing.

I walked over and he said, ‘Good morning’.”

“My name is Glen Cairn.  Glen spelled with one ‘n’. Some call

“You’re handsome, you sing well, and you’re the essence of spring.

How would you like to be the symbol of Come-See-Me?”

During his lifetime Vernon Grant struck over twenty-three official poses of Glen and drew even more images for the festival’s coloring contest. Glen was clad in a variety of attires.  No matter how Grant dressed Glen, you could count on Glen wearing Grant’s signature shoes with turny-up toes.  Glen the Frog has appeared on bumper stickers, tee shirts, hats, visors, bottles and other festival souvenirs.  Grant would be happy to know that Glen is celebrating his forty-eighth
birthday this year.