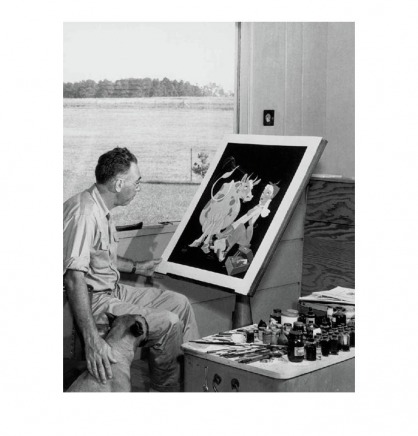 Some of the nation’s earliest periodicals were founded to inform and enlighten a developing country.  Their content was generally concerned with biographies, science, politics, religion or history.  To visually break up solid pages of type, artists were commissioned to draw or paint an incident from an article or story.  Editors soon realized that people enjoyed the pictures and were more likely to read material if it was illustrated.  Similarly, readership and newsstand sales of a magazine were greatly increased if an illustrated cover was added.

During the “Golden Years of Illustration,” a period between the late 1910s and the 1940s, the art of illustrators dominated the advertising and magazine cover markets.  Only the best illustrators were chosen to do covers.  Vernon Grant was one of the best and most prolific.  He combined his humor, life’s experiences, and keen observation skills to captivate millions of magazine readers.  Vernon Grant illustrated the covers and interior drawings for seventeen different magazines.

Vernon Grant’s illustrations appealed to adults and children alike.  A common aim of advertising, both yesterday and today, is to make an impact, to captivate and to convince readers to buy.  Magazine editors liked the sales generated by Grant’s eye-catching illustrations.  “A bad cover . . . a drop in sales; an especially good one . . .an increase in sales,” Grant once commented. One publication labeled Grant as “a top-flight artist-illustrator.” His illustrations were as well known to the readers as the work of the authors whose words he illustrated.

In 1945, at the height of his career, Vernon Grant made $1000 a week illustrating ads for everything under the sun from cereal to automobiles, from chocolates to razor blades, from men’s shirts to electrical appliances.  His gnomes, pretty, sexy-looking girls and love-struck couples were on the fronts of America’s top magazines.